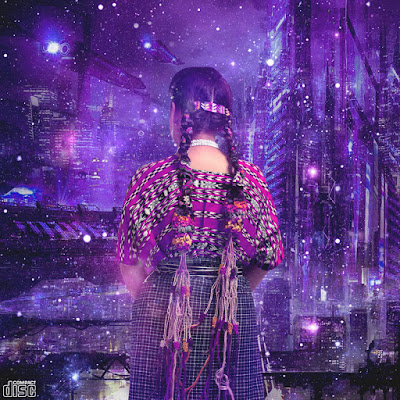 We're told that the past is a foreign and distant land, but what about the future? Will our thoughts and actions be intelligible to people living a hundred years from now? How about 500 years? Will the people who inherit the Earth from us comprehend our motives in the here and now, or will we be as strange to them as those Scandinavians who bound and buried their dead in bogs are to us? There really isn't any way of knowing.

How ever future people come to understand us, I hope they can forgive the mess we've left them. We've filled most of the ground and water with our trash and superheated the atmosphere by burning excessive amounts of carbon. Kind of a shitty housewarming gift if you ask me. "Here is this planet. It was our home, not it's yours. Sorry, we sort of ruined it. Anyway, hope you have fun here. Byyyyyyyyye!" That's how I see this cross-generational, multi-century conversation going- just a lot less amusingly.

I don't know that Guatemalan electronic producer LIFE2979光 actually thinks all that much about the environment and what the industrialized nations of the world have done to it, but I do get the sense that his album Neo​-​Xelajú is an attempt to forge the river of time to deliver a message to the future inhabitants of the present-day Americas. The album takes as its setting a Mayan culture that has embedded itself in a cyberpunk future. Sampling Gautimalian marimba from the first part of the 20th Century and translating it through the misty, futurist oscillations of dreampunk, LIFE2979光 has produced a vibrant and verve saturated version of ambient vaporwave that feels both hopeful and thoroughly grounded in its familial roots.

Each of these tracks is lush and tantalizing to the senses, like you are being misted with a confectionary coating as you pass through successive thresholds of time and sound that have been erected in tribute to his nation's indigenous ancestry. Each more intriguing than the last. The samples are, for the most part, treated respectfully, and are modified only enough to allow them to sparkle like a lantern in the distance, cutting through the humid torpor and tropical ambiance of the album's tranquil undergrowth to guide you forward.

Neo​-​Xelajú is an album that feels like you've stepped into a lucid dream, one which you experience with your eyes wide open, breathing deeply to taste the sweet air as it fills the vessel of your lungs like a jar slowly being filled with a leisurely drizzle of honey. Not only is Neo​-​Xelajú beautiful but its message of love and solidarity could not be more apparent from my vantage point. I can only hope that future generations will agree, because this is a much better gift to them than miles upon miles of landfill or a JPEG NFT.

Get the album from DMP Records.