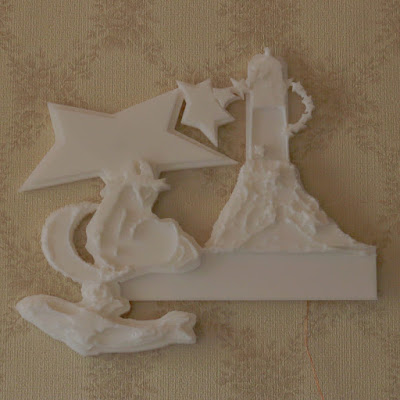 Emboss Star is Kazumicihi Komatsu's first album under his own name. Local to Kyoto, and formerly known as Madegg, Kazumichi uses the occasion of his latest album to shuck the shell of pretense surrounding the presentation of pop music in approaching it from a purely sensory and psychoacoustic perspective. Specifically, Emboss Star is an examination of the way that sound effects memory and emotion when it is played back over itself and layered to generate a sense of acoustics resonating through space. This concerted inquest and interrogative approach ironically enables a richer emotional experience of the music than can be encountered through nearly all conventional pop music presently climbing the charts (at least in the US).

Compositions like "Emory" convey the sense of receiving a phone call from a friend in a dream; the words being spoken to you are nearly unintelligible and their literal meaning melts like wax before a flame as soon as they alight your ears, but the warmth of the impression of reassurance that the conversation leaves you with is incontrovertible. This dialectic between sensation and cognition is revisited on the piano lead "Orca," only in the opposite direction, where rosy but cautious tones quibble with electronic feedback and chortles as they attempt to dredge you out of a state of reverie and return you to the waking world. Most of the tracks on Emboss Star have a hypnagogic dimension to them, either in structure, or texture, or both. Even the conventionally pop-oriented "Umi Ga Kikoeru" swelters in a kind of vision-trance and delirious haze, its tropical rhythms and breezy duets blending with fluid, oneiric sense-perceptions like the fragrance of the changing seasons mixing with the scent of wind in fall.

What I think works well about Emboss Star is not just the skill with which it is weaved from the fabric of dreams, but the straightforward way it approaches its mission. The album acknowledges that all pop music intends to evoke a reaction from its audience, that when it succeeds, it is capable of manipulating mood and memory through sound. Kazumicihi's efforts elicit your assistance in the study of such a phenomenon, acknowledging the role that you always play as a listener in giving consequence to sound and elevating your position to its rightful role of collaborator.