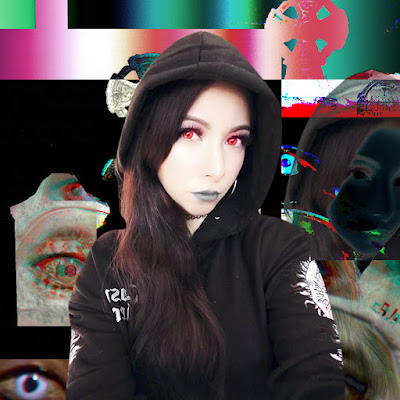 Witchhouse: The scrumptious black truffle of the electronic music world. Living underground and exceedingly rare, it is also one of the more deliciously textured and palatable acidic forms of all chthonic cultures. Did I mention it's rare? At least, I hardly see it anymore. After surfacing briefly in the late '00s for a few Pitchfork features, it once again succumbed to the evanescence of subterrania where it remains to this day. If you are like me, nose in the digital dirt, snorting like a trained animal, perpetually on the hunt for things you read about a decade or more ago on some long-dead forum, then you might appreciate Chile's Humanfobia. They release an album about every four months and they're all haunting and dripping with curious, appetizing impurities. Of these releases, I'm feeling particularly attached to Into The Nightmarecore at the moment. It was revealed to the world in January of this year and its got me swept up in its dark gait. The opening track "† INT∎ THE NIGHTMARECORE †" literally sounds like an incantation with backmasked vocals and hypnotic synth spells. I'm also really relishing the way the melodies are spaced out and intersect with the beats and vocals on "🔮 SHADØW WARLØCK 🔮" as they maximize the sense of dislocation produced by the track and make you feel like you're passing into another world. "🌙 MACHITUN 🌙" has the ominous and piercing quality of a dark omen peaking through the clouds of an overcast night sky, while "GH∎STS ∎F THE WEB " embraces the internet native soundtrack by floating along the tether of a new agey synth riff. This album (and really, and of Humanfobia's work) is probably best enjoyed while steeping in a cloud of incense- just remember to take the batteries out of your smoke alarm before you attempt to set the mood.*
*Also, don't forget to put the batteries back in after you're done, or else you might end up having to listen to the next Humanfobia album while sitting in a pile of ash... which would actually be pretty badass. Never mind- you do you.
Posted by Mick at 4:12 PM