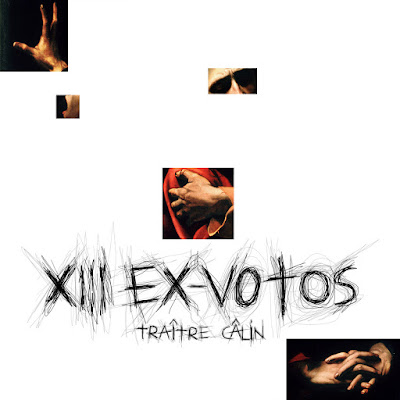 Traître Câlin are a French hip-hop group who have adopted an off-putting and blasphemous stage persona, one befitting the subject matter of their music. Their style of hip hop has a phrenetic and highly kinetic quality to it, that threads through the gears of industrial electronic production a ribbon of discontent peeled from the intestinal lining of that great ignoble beast, Throbbing Gristle. Their wet and filmy production is as much indebted to Diapsiquir as the various forms of trap that spit and stammerer their way out of the South-Eastern United States during the early to mid-'10s, but without any of the provincial interests that hip hop of that era would concern itself with. Traître Câlin doesn't tell tales of survival. They tell stories of the already departed.

XIII EX - VOTOS is an aural companion, containing thirteen psalms of perverse invocations illuminating the extent to which the human soul can explore the depths of its own loss of faith. It's loss of stable theological footing. It's gleeful divestment from the tenants of virtue. The abolition of the pillars of entitlement that would permit it to receive the gift of grace.

On XIII EX - VOTOS, Traître Câlin presents for us the provocational shrieks and murmurs of a babbling corpse, whose only purpose in continuing to describe the dirt of the earth with its shambling gate is to remind others of their own loss of faith, of the pang of hollowness that moves them to maintain their hallowed traditions and declare their allegiance to a necrotic kingdom they will never know in this life, or any other. Each track is a consecrated letter containing a bitter truth. One that you may wish to return once you've held it to the light of the mind and felt its weight in comparison to the barren interior of your own convictions. XIII EX - VOTOS is an offering you may be loath to accept, however much it may expose deeply uncomfortable revelations that spring like leaks in a life raft from the substance of your own lived experience.

You can pick up a copy of XIII EX - VOTOS from Solium Records here or Atypeek Records here.